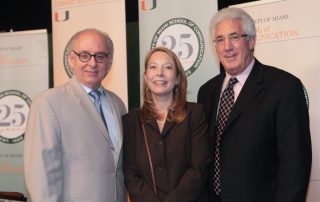 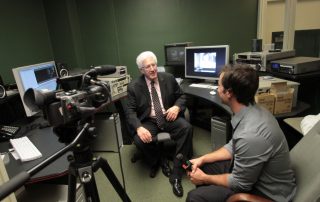 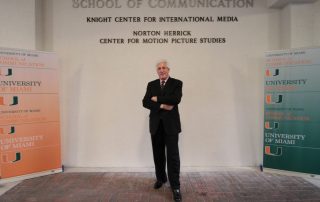 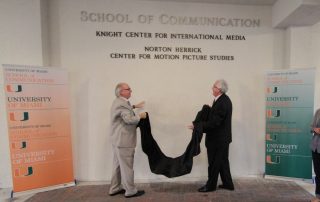 The School of Communication named the Norton Herrick Center for Motion Picture Studies at the University of Miami on Wednesday, Feb. 23, 2011.

The new Herrick Center will provide support for motion picture research, facilitate the study and teaching of film at UM and enrich the intellectual and cultural life of the University and the South Florida community through lectures, conferences, seminars and workshops, and through screenings at the Bill Cosford Cinema, the University’s on-campus state of-the art theater.

Herrick was the recipient of the 2010 University of Miami’s Presidential Medal for outstanding leadership and distinguished accomplishment and was recently named among the “Top 50 Philanthropists” in the U.S. by The Chronicle of Philanthropy. “It is an honor to receive such recognition from The University of Miami, but more importantly to know that the wealth of material that comprises the film collection will go to such wonderful use and be of such great value to the University and its student body for generations to come,” Herrick said.

During its first year, the Herrick Center, led by its director, Christina Lane, an associate professor in the School’s Motion Picture Program, will work with NuRay Media to inventory and digitize the collection of more than 3,500 individual films and video tapes so that it can be screened with contemporary technology. Once digitized, students and faculty will be able to use the titles for study and research. The Herrick Center director will focus on teaching, scholarship, and programming utilizing the collection.

UM leaders say the new Herrick Center for Motion Picture Studies and the collection will boost the School’s stature in cinematic holdings and establish it among the top film study programs in the academia.

“The Herrick Center and its collection will be a rich and varied resource for our motion picture students at both the undergraduate and graduate level,” says Dean Sam L Grogg. “And the new Center will galvanize the program’s ongoing commitment to understanding and preserving our cinematic history.”