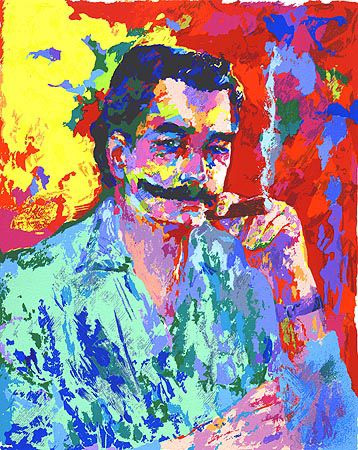 Of all contemporary American artists, LeRoy Neiman’s appeal to both critical and popular audiences is nearly matchless with respect to longevity, consistency and sustained success.

Of all contemporary American artists, LeRoy Neiman’s appeal to both critical and popular audiences is nearly matchless with respect to longevity, consistency and sustained success. For both substance and style, he is immediately recognizable: a visual chronicler of humanity at sport and play, delivered in a bold, colorful amalgamation of elements from Social Realism, Abstract Expressionism and Abstract Action Painting. His images have graced the walls of museums and galleries, clubs and private homes. Neiman is egalitarian in his thematic choices, for although he has gained a considerable reputation for representing society’s creme de la creme – aristocrats, celebrities, major sports figures – he is as much interested in the activities of more ordinary folk – barkeepers and showgirls, stableboys and beachgoers. It is the vitality of the moment that captures his attention and which he, in turn, communicates to a worldwide audience.

Since his entry to the art world in the early 1950’s, Neiman’s singular style has excited the imagination by translating feeling into form with bold line, brilliant color and complex composition. Abstract Expressionism freed the artist from content, changing the focus to the process of painting. The gesture, the event, became paramount in importance. Neiman embraced the conceptual framework of the movement, but didn’t abandon the figurative element. Instead, his work represents a hybrid of ideals: the pure, radiant color of the Fauvists, the gesture of the Abstract Expressionists, the Social Realists’ desire to visually comment upon the lives of their contemporaries. Upon close inspection, a Neiman image appears to be a convergence of abstract shapes. It is distance that resolves the shapes into dynamic figures – people and animals that move and interact with an energy that seems barely contained by the canvas.

Born in 1927 in St. Paul, Minnesota, LeRoy Neiman didn’t consider art as a possible profession until the 1940’s, after he enjoyed minor celebrity with his fellow GIs for some murals he painted in a series of mess halls. Following his Army service, he returned to the United States in 1946, and developed his artistic talent through formal education at the St. Paul Art Center (now the Minnesota Museum of Art) and at the School of the Art Institute of Chicago.

Two seminal influences in Neiman’s career developed during his time in Chicago. The first was his appearance at sporting events, where he would paint or draw the athletes, the coaches and the competitions. Secondly, through his friendship with a publisher named Hugh Hefner, he began to regularly contribute original artwork to a controversial new magazine called Playboy.

LeRoy Neiman’s long and fruitful association with Playboy was the springboard for some of his most distinguished work. From the 1950’s through the 1970’s, he traveled around the world “on assignment” from Playboy, chronicling the liveliest aspects of society and sport. He created a body of paintings for the “Man of Leisure” series that would later become known as the renowned “Playboy Collection.” As other major publications took to featuring his work and through his association with ABC Television as the official artist for three successive Olympics, LeRoy Neiman achieved an unprecedented level of popularity with the public.

Neiman lived and worked in New York City until his death in 2012, continuing to paint with the sense of energy, wit and good humor that first brought him attention. For decades, he has delighted charmed viewers with the drama of people at play. It is testament to his inimitable nerve and style that LeRoy Neiman’s appeal has not flagged and a suggestion that art history books will recognize him as one of the most important artists of the twentieth century.